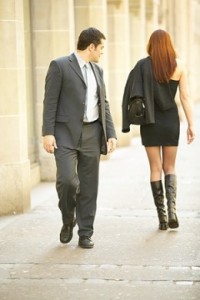 We swoon over a guy or girl whom we are attracted to. But what drives our attraction and why does it happen so suddenly? The thing is attraction works in mysterious ways, but biology and evolutionary psychology provides the science behind it. This article discusses why attraction happens and why it is a normal bodily attraction.

We always believe that we fall in love at first sight. However, the truth of the matter is that we fall in love at first smell.  Smell refers to our ability to sense pheromones. Pheromone is a scent-bearing chemical that is secreted from our body fluids like sweat. In the animal kingdom, pheromones play an important role in sexual attraction. Recently, scientists have found that we also exude pheromones. A type of pheromone we naturally release is called androstadienone, androstenone, and androstenol.

In one specific study, female participants were asked to smell various male sweaty undershirts. The study revealed that women can smell how symmetrical the owners of the shirts are, thus giving them information about how attractive they [men] are. Symmetry is an important factor that can indicate the attractiveness of a person.

Men Can Detect If A Woman Is Fertile

Pheromones also allow men to detect if a woman is fertile or not.  During the peak of the menstrual cycle, women give off different scents that may make her attractive to men. A research conducted by the University of Texas investigated this phenomenon by asking women to wear shirts and sleep in during infertile and fertile points of their menstrual cycle. They asked men to smell the T-shirts and assessed which they think are the most pleasing. Interestingly enough, men assessed that the shirts worn by women on their fertile days smell more pleasant and attractive.

In another study conducted in Britain, scientists found out  that men find a woman’s face attractive during her fertile days. The research involved asking a group of men to look at two sets of  pictures of women  during their low and high fertility cycle. Almost 60% of the men rated that the pictures of women during their high fertility cycle as attractive.

It is not only men who are capable of determining attractiveness in women. In fact, women can also assess the markers of masculinity in men.  The thing is women prefer men who have masculine features, like broad shoulders as well as a strong jaw line. Evolution dictates that men who have these features are virile and are of good health.

Although evolution dictates that women should seek out virile men, the modern context of being manly has changed through time. This means that not all women prefer masculine men. According to the research conducted by the Face Research Laboratory, women coming from depressed areas tend to look for masculine men while women from developed areas look for men with several feminine features. However, evolution still played a big role when it comes to preferences. In another study, it was found out that women whose partners have more feminine features tend to look at masculine men when they are ovulating. Women who already have masculine partners do not do this kind of behavior.

Masculinity is a way for men to advertise their good genes as well as dominance. It also sends a message to women that they are likely to become good fathers to healthy children.

When it comes to the science of attraction, we are not only attracted to good physical looks, but also to personal attributes. This is the reason why even if men are not masculine, they are still able to draw the attention of hot girls.

There are many traits that make men more attractive to women and vice versa. One of the most important traits is kindness. Kindness can make one look more attractive. In 2014, researchers conducted a study about facial kindness and attraction. The researchers found that pictures that depict positive personality descriptions get high facial attractiveness than those that show neutral emotions.

The personalities that we have can affect our facial attractiveness and this is explained by the halo effect. This is the reason why we tend to say that our inner beauty radiates outside to make us more attractive.

Our Attraction Is Our Individual Choice

Although scientific researchers found out that we are hardwired to choose our mate based on our evolutionary biology and adaptations, who we are attracted to remains our individual choice and preference.

Anthropologists studying our dating behaviors found out that, we have individual maps to determine who we want to be attracted to.  For instance, some people get turned on by different things.  It is also interesting to take note that our individual choices for our mates are largely dictated by our culture as well as social norms.

Interestingly enough, one study suggested that hormonal pills (contraception pills) can influence the preferences of women when it comes to choosing their mates. The pheromones that men release provide women info on his MHC genes (major histocompatibility complex) which play a very crucial role for the immune system function. Further, women prefer men with different MHC genes to have more varied gene pool for their potential kids. Women who are taking contraceptive pills display preferences for men with almost similar MHC genes with them. It is also interesting to take note that women with long time partners, but have just recently taken hormonal pills also tend to shift their preferences.

There is a science behind attraction and it is important to consider that there are many factors that govern our preferences when finding a mate. The complexity of the scientific explanation of attraction is perhaps one of the reasons why it is so challenging for both men and women to be able to find their partners despite a world full of potential dates.